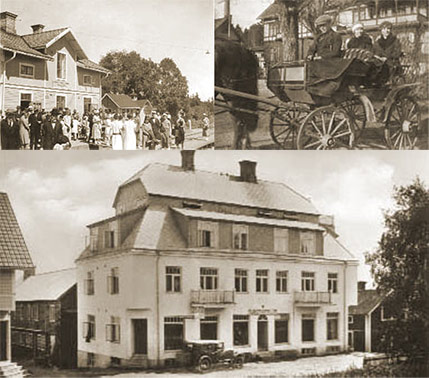 In 1891 the main railway line from the south was laid through Vikarbyn and on to Mora, and one generally says that this marked the beginning of tourism in earnest. But even earlier in the 1800’s so-called “road tourists” had been passing through and making a break by staying at one of the inns or farms in the village.

Many town and city families, in need of a change of air in a peaceful rural milieu, began to take rooms in the village boarding house and farms. Children who stayed here every summer while they were growing up came to see Vikarbyn as their special summer village and many of them even today still return.

It would seem that Vikarbyn was a fairly considerable tourist resort in the 1920’s, 30’s and 40’s. One could not of course compete with the large local hotels for their type of tourist. Instead one aimed at a middle class who were perhaps not so concerned with luxury standards. So many Vikarbyn homes and farms opened up during the summer and welcomed guests.

View over Lake Siljan from our Guest House

The character of present day tourism has changed and the local residents around Lake Siljan have adapted accordingly. Today self-catering cottage/cabin rental is the predominant form of tourist accommodation.

Vikarbyn is reckoned as one of Sweden’s largest villages and at the beginning of the 1960’s access & communication was further improved when the main road 70 was extended through the village and the surrounding area. Today the village extends over both sides of the main road.